Todays post on the Egg Chair, should be a treat.  It  was designed by Jacobsen and is made of aluminium, foam and upholstery.  Many of the reissues of this design have taken great liberties with that last fact, and have found new and creative (some successful, some not so much) ways to play with the chairs upholstery.  In collaboration with Fritz Hansen, the two designed the chair for the Royal Hotel in Cophenhagen.  It is a fun, organically shaped chair that also provides plenty of privacy and looks perfect for lounging in 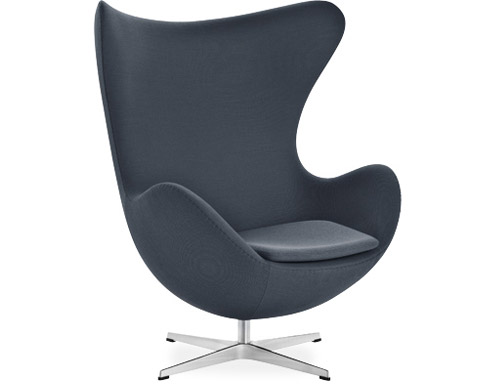 In 2008, Danish artist Tal R. created, or rather, interpreted,  the Egg Chair in 50 different variations of patchwork to celebrate its 50 year anniversary.  Thats fine, I guess, but let it be known that I am not a fan of patchwork quilted anything if its not an actual patchwork quilt. Ok, some of them arent so bad, but one of them is covered in Pokemon squares.  Pokemon!!!!

Anyway, if youre interested and cant afford one of the 50 chairs that have already been snatched up, you can get the Egg Book, a book of postcards featuring all 50 chairs. 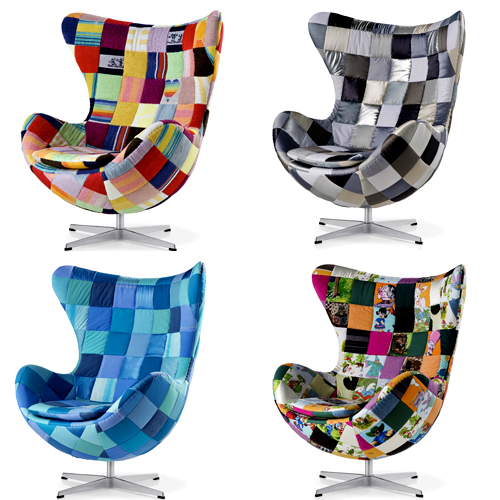 A limited edition version of the Egg Chair reproduced by Republic of Fritz Hansen and inspired by the Hitchhikers Guide to the Universe.  There were 42 original editions produced, each with a variation of an exploding Earth on the back.

Show here with the ottaman

The Egg Chair is also available in leather and a variety of colored cowhides.  Obviously, that makes them VERY expensive.  Fun fact:  it takes an entire cowhide to cover one chair.